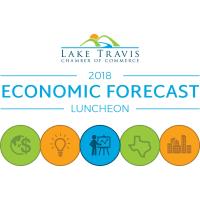 The annual Lake Travis Economic Forecast provides attendees with first hand information about growth and development in the South Lake Travis area. Hear from city officials, the school district, an area residential and commercial Realtor and a representative from the Federal Reserve Bank of Dallas.

Dr. Brad Lancaster is the Superintendent of the Lake Travis Independent School District, a position he has held since January 2012.

A former teacher, assistant principal, principal, executive director for curriculum, assistant superintendent, and superintendent in the Midway, Allen, Ennis and College Station school districts, he earned a Bachelor of Science degree in Secondary Education from Baylor University as well as Master of Science in Educational Administration and Doctorate of Education degrees from Texas A&M University in College Station.

He and his wife Karen have two children, Julia and Will—both of whom attend Texas A&M University.

Steven Jones, City Manager, City of Lakeway
Steve Jones began his career in municipal government in 1985, and has been the City Manager of Lakeway since April 2005.  He holds a Bachelor of Science degree in Business Administration from the University of Texas at Austin and is a member of the Texas City Managers Association.

Steve has served on many boards and committees including serving as the director of an economic development corporation, a steering committee member for the Austin-Travis County regional radio system and communications center, a member of the Texas Municipal League Legislative Committee, and a member of Austin Energy’s Rate Review Public Involvement Committee.  He currently serves as a small cities representative to the Austin-Travis County Emergency Services Division.

He currently manages the day-to-day operations of the City of Lakeway under the direction and guidance of the Lakeway Mayor and City Council.

Doug Land is a Broker/Associate at Kuper Sotheby's International Realty and has worked in Real Estate in the Lake Travis area for 22+ years. He has owned and/or managed companies for 18 years. He has a double degree in Computer Systems and Accounting from Oklahoma State University and worked in banking prior to entering Real Estate. He has consulted with LTISD, Fire Department and local municipalities over the years. His wife, Mary, is also a real estate broker and a graduate of University of Texas. He has called Lakeway home since 1992 and is active at the Lakeway Church and the Hills country club.

Keith Phillips joined the Federal Reserve Bank of Dallas in January 1984.  His areas of concentration include regional economics and economic forecasting.  Research Papers in
Economics, which tracks publications in economics, ranks Phillips in the top five percent of economists across the world in terms of the number of distinct publications.  Over the past
sixteen years he has been the most accurate forecaster for Texas job growth in the Western Blue Chip Economic Forecast.  In August, 1996, Phillips was transferred to the San Antonio branch in an effort to improve the regional economic coverage of the Dallas office and to better serve the needs of the South Texas community. Phillips teaches courses in managerial economics and quantitative analysis in the Executive MBA program at UTSA.  He obtained his Ph.D. in economics from Southern Methodist University and holds a B.A. and M.A. in Economics and a Bachelor of Journalism degree in News/Editorial from the University of Missouri at Columbia.

All registrations must be received by Friday before . We are unable to issue any refunds for cancelations. NO SHOWS WILL BE BILLED!
Unpaid seats will be given up by 12 Noon to guest on waitlist.

Google Yahoo iCal (Outlook, Apple, or other)
Scroll To Top